Some things are developing that cause me to be concerned about where our democracy may be going. I’m concerned about things that are inconsistent with public accountability. Things like:

“About 90 Toronto police officers are facing disciplinary action for removing the name badges from their uniforms during the G20 summit, Chief Bill Blair said Wednesday.”

Another article in the Star from Toronto Ontario, dated January 24, 2017

“A Toronto man who lawfully recorded police arresting and Tasering a man near Ryerson University on Tuesday was repeatedly told by officers to stop filming the interaction, then threatened by two cops who claimed they would seize the phone he was using to record it.”

Equally troubling are the kind of directions given to police officers by those higher up, when addressing gatherings of people in protest.   By way of example, check out what’s referred to in the May 16, 2012 report from CBC news cited here

“Deputy Chief Tony Warr issued such a directive late on June 26 following a day in which police lost control and saw windows smashed and a police car set ablaze. 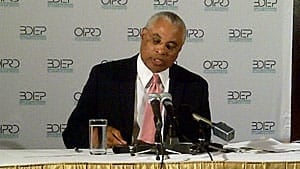 Gerry McNeilly, head of the Office of the Independent Police Review Director, speaks to reporters about G20 protests in June 2010. (Dave Seglins/CBC)

“The night shift incident commander said Deputy police Chief Warr told him that he wanted him to take back the streets,” writes McNeilly in the report. McNeilly said the commander told him, “‘I understood his [Warr’s] instructions to mean that he wanted me to make the streets of Toronto safe again. He wanted the streets that had been made unsafe by the terrorists that were attacking our city to be made safe again by restoring order.'”

Referring to protesters in such a way left the impression that they were criminals, the report says, and that attitude resulted in the decision to contain and arrest approximately 1,100 people during the weekend summit.”

and a little later in the above article:

“McNeilly says Toronto Police Services Chief Bill Blair intervened to end one kettling incident in which hundreds of protesters as well as residents and passersby were held for hours at the intersection of Queen and Spadina late on June 27 as the summit was winding down.

“About 400 people were detained in pouring rain for four hours while the arrests were being processed,” McNeilly states. “In the end, Chief Blair himself went to the [Major Incident Command Centre]. He called the incident commander and the public information officer out of a meeting and ordered that the people at Queen and Spadina be released unconditionally and immediately.”

By then, more than 300 people had been arrested or detained, mostly for breach of peace. The reports says it was “unreasonable and unnecessary” to arrest people one by one during a severe rainstorm.”

Another aspect of my concern in this area is the increasing militarization amongst the police forces.  Here’s a police vehicle purchased by the Vancouver British Columbia Canada police department.  It cost them 350,000$.  Kim Bolan, a reporter with “The Province” reported on it in September of 2010  here.

The one above is owned by the Ottawa police, reported in 2014 by the National Post.

As I understand it the police say that with criminals increasingly having high powered rifles, they need an armoured vehicle.   To this I would like to inquire, which criminals in the last 10 years in the entire greater Vancouver area or the Ottawa area have engaged, actually shot at, police, with a high powered rifle?  How many specific times?  How many police or members of the public died in those events?   And of those times, how often was there any warning whatsoever such that police would have been able to bring this military monstrosity into a place where human beings live (ie.  not a war zone)  and save the people that died.  Of those occasions, if there really are any, any at all, how many times have police driven such a vehicle into the actual fire zone, where the assailant had fire control with a heavy rifle over the area?  If  there are any such occasions, I ask why.  Why the heck did you do that, and to what gain?   I say that this sort of police acquisition is more of the removing of badges, covering of faces, and increasingly trying to appear as a military force.  I understand that we have a need for a military force.  Sometimes there are war environments, and that kind of environment is one that is completely foreign to a functioning civilized society.   That environment requires an military force.   We, in Canada, in absolutely no city anywhere in Canada, are anywhere near a war environment.   We might use phrases like war for the environment, war on drugs, there’s all kinds of commentary, but it’s not war, it’s not a war environment.  But…. by trying to appear as a military force, our own police forces are adopting the aura of a war environment.  A state of war is about everything not freedom, cancelling freedom.   The very concept of “cancelling freedom” is counter to freedom itself.   The very action of appearing as a military force in the midst of an operating democracy is about an attempt to walk over freedom, essentially to cancel it.

On the same theme, there’s increasing militarization of police forces in Canada in terms of the gear they carry and their presence at public functions.  Here’s an officer at a Canada Day Celebration in Kelowna British Columbia.  I note that Kelowna is a town of around 50 or 60 thousand people, it’s not a capital city, and it’s never, to my knowledge, had any sort of “terrorist” attack.  What I ask would he possibly do with a firearm of this sort in a crowded environment associated with a Canada Day celebration?

This post is a bit of a work in progress.  I’ll be cleaning it up over time and adding to it.  But the substance stands as it is.  I’m concerned about this sort of thing.  We all should be.  Militarization, a police force hiding its members, these are very concerning matters, they’re not right in a democracy.

2019.03.27 – Here’s another vehicle spotted in Lumby on 19.03.09.  It’s quite different in appearance to the one that was owned by the Vancouver Police Department.  How many of these do we have running around in BC and at what cost??

One thought on “Signs of a police state under development”